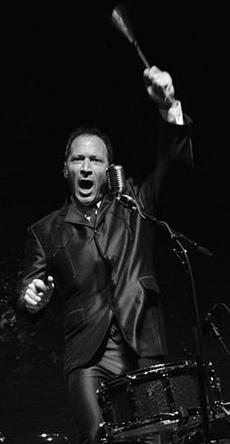 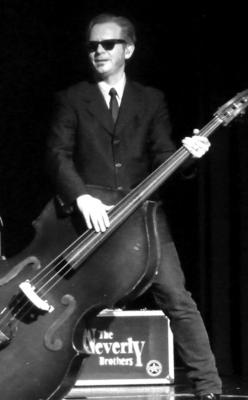 About the Band members:

*Kevin Giragosian – vocals, guitar, harmonica - Kevin has been a prominent figure on the Chicago live music circuit for over 20 years. His original recordings, with his former power-pop band THE WOMBATS, have been aired on various Chicago area commercial and college radio stations including WXRT and Q101. His love of vocal harmony, early-American rockabilly artists and British Invasion bands brought him to create this unique and powerful musical act. As a vocalist he is extremely versatile and equally effective singing either lead or backing harmony. His signature “electrified” acoustic guitar sound he developed for the act has also become a highlight and integral part of their sound. In addition to being a talented vocalist and guitarist, on stage Kevin fronts the band - assuming the role as the “virtual tour director.” By sprinkling the show with insightful bits of music trivia and history between songs, he adds more meaning and relevance to the music - giving concerts goers a new-found appreciation to songs and artists they’ve long been familiar with. These narrative footnotes add yet another unique facet to their one of a kind act. Kevin’s energy, showmanship, personality, strong vocals & aggressive guitar playing make him one of the most engaging and entertaining front men on the live circuit today - at the helm of one of the most potent and talented true rock n’ roll bands around.

*Kegham Giragosian – drums, vocals - Keg started his musical career in the early 1990s as the drummer and harmony vocalist for brother Kevin’s former band The Wombats. As a vocalist he is equally adept at handling either lead or background harmony. When Kevin & Kegham sing those sweet two-part vocal harmonies, a la The Everly Brothers or John Lennon & Paul McCartney, you’ll find yourself saying: “Only brothers could harmonize like that!” As the drummer for The Neverly Brothers, he has developed his own unique, energetic and visually entertaining playing style. He stands, not sits, behind a minimalist drum kit - consisting of only a bass drum and a snare drum – and swings his arms in windmill circles beating the snare drum with brushes - not sticks. Although it may look unorthodox, he lays down a solid beat and driving rhythm more powerful than most drummers using conventional 4 and 5 piece kits. His intuitive vocal sensibilities and unique and animated drumming style make Keg an integral part of the signature “Neverly” look and sound.

*Mike Bradburn - upright bass fiddle, background vocals – Mike has been a long-time veteran of the Chicago music scene for over 25 years. He continues to play upright bass fiddle and electric bass for several respected Chicago area bands – the majority of the time with The Neverly Brothers. Mike rounds out the vocal arrangements with his spot-on background vocal harmonies. As an upright bass player he has great musical sensibilities; knowing when to lay back in the pocket and when to drive the song with pulsating power.  Always in sync with Keg on drums, Mike’s style helps to create a solid rhythm section that forms the foundation of the group's sound.